It is our regret to inform the community that unfortunately Dominic has passed away. 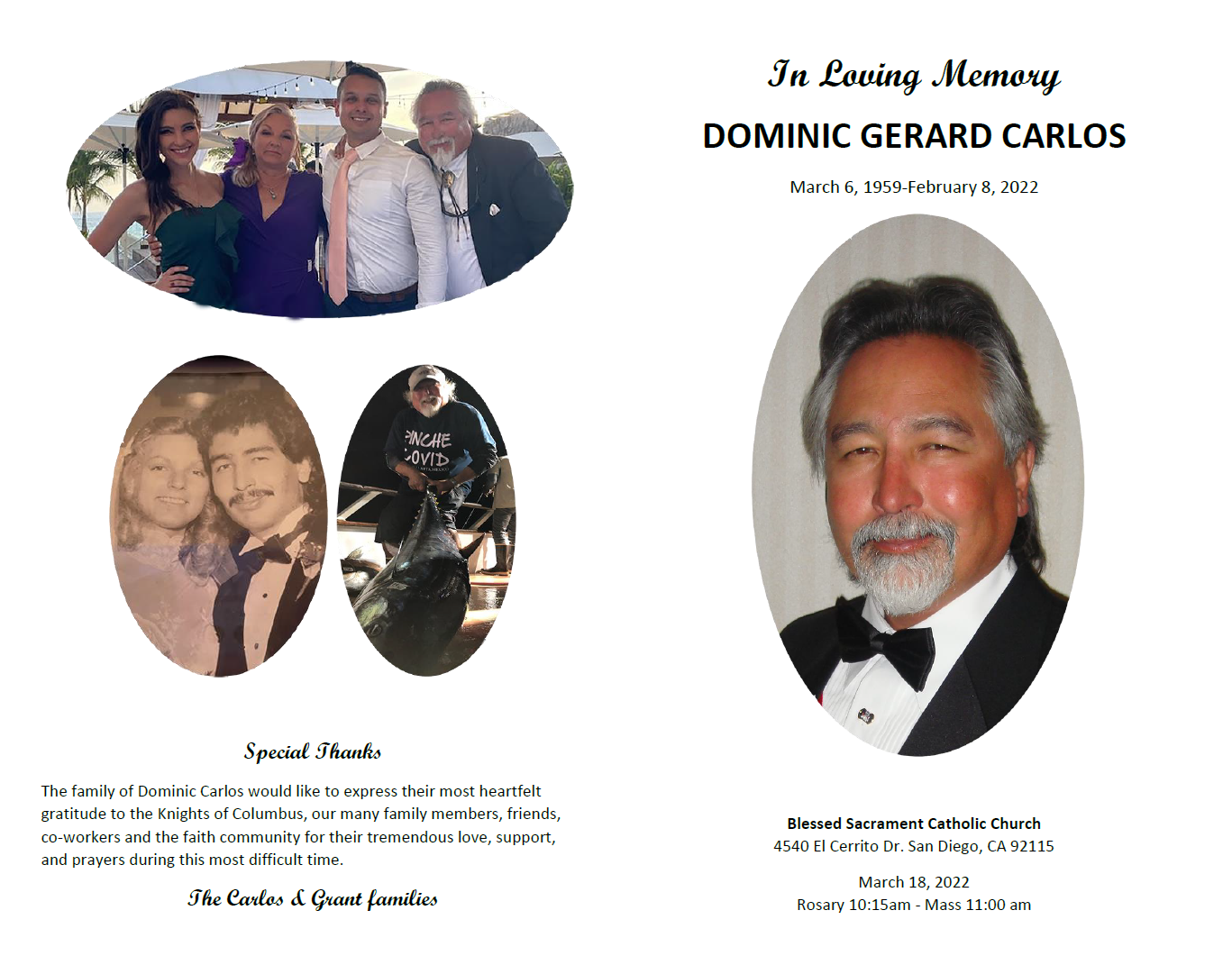 DOMINIC G. CARLOS
Dominic was thankful for the grace of God. He was born in Los Angeles, raised in Santa Clara, and resided for decades in his beloved San Diego. He loved his family first and foremost. Dominic was extremely proud of his son, an Army veteran and current Harvard student, and his daughter, a former SDSU cheerleader and now Physician’s Assistant.
A skilled and passionate fisherman, Dominic was happiest wherever the fish were running. He was a talented artist, an avid reader, a dog whisperer, and passionate sports fan who enjoyed watching all sports. He enjoyed gardening and took pride in his meticulously manicured lawn. A self-proclaimed grill master and sushi chef, he loved nothing more than BBQing and entertaining in his backyard, regaling all those who would listen of his epic fights with blue fin tuna or the superiority of the San Francisco 49ers. His charm and charisma touched many lives. His humorous anecdotes were legendary.
Dominic was a man of many passions. At a young age, he became an entrepreneur, co-founding the Four Seasons Lawn Aeration, Inc., which he then ran alongside his wife Alison for the past 41 years. Dominic has been at the top of his industry and has been interviewed and consulted for his expertise by colleagues throughout California. He was a boss and mentor to hundreds of employees over the years. Dominic was an active parishioner of Blessed Sacrament Catholic Church and a proud 4th degree Knight of the Knights of Columbus.
He is survived by his wife of 40 years, Alison Grant Carlos, and by his children Jesse and his wife, Racha Lwali, Dominique and her fiancé, Drew Steckel, his parents Jesus and Rosalva Carlos, brothers Marc Carlos and his wife, Tonya Carlos, and Gabriel Carlos, mother-in-law Carolyn Grant and many other relatives who loved him very much.
He will be dearly missed by his wife, family, friends, and co-workers.
In lieu of flowers, gifts may be sent to Life and Light (kofcbringlight.org) or Friends of Rollo (captianrollo.org). www.eastcountymortuary.com